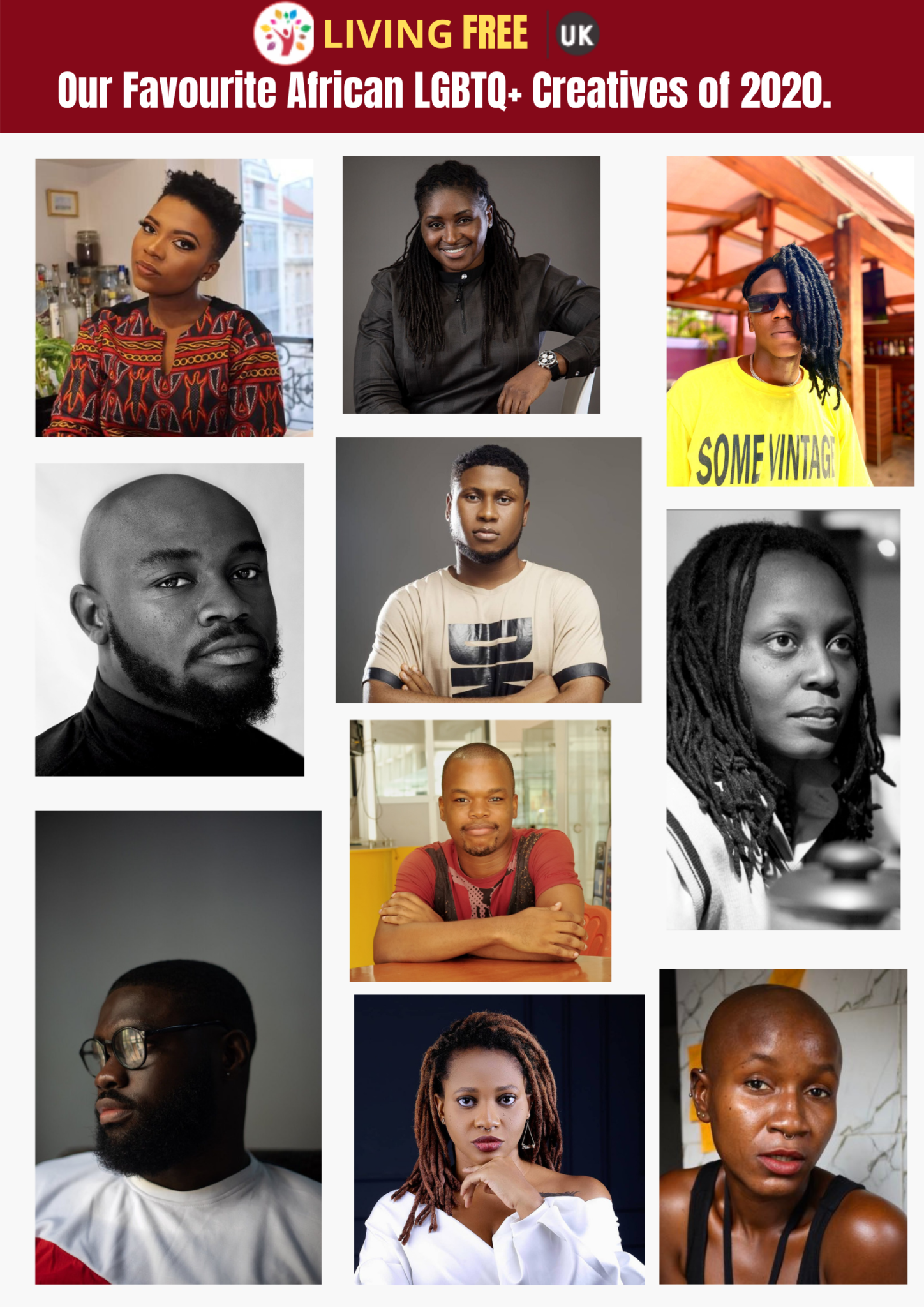 2020 has been one of the most historic years in history, and there are a lot of things to unpack about the year. The world was hit with a virus, people died around the globe, and there were different important movements all over the world, but one thing that stands out this year would be the people who through their creativity have amplified LGBTQ+ issues, and made sure our voices were heard.

In no particular order from the editorial desk, these are our favourite African LGBTQ+ creatives of 2020.

Pamela is a screenwriter and filmmaker, who uses her voice to talk about LGBTQ+ issues. She is all for empowering the LGBTQ+ community in Nigeria. Her new film, Ìfé which is now streaming on EhTV Netwrok is the first lesbian film in Nigeria.

Harry is a television presenter, journalist, and media consultant. Through his platform, he writes on anything LGBTQ+. He is the director of a documentary which features vocal LGBTQ+ youths in Nigeria, and which explores how LGBTQ+ Nigerians living in the country are affected by the laws in place.

Kiki is a blogger/YouTuber who uses her platform to support LGBTQ+ rights in Cameroon. She is also a spokesperson for the Rainbow Equality Hub an NGO that supports LGBTQ+ people in Cameroon.

Uyaiedu is a filmmaker and storyteller. She is the director of Ìfé. During the #EndSARS movement in Nigeria, she used her platform to highlight and talk about the LGBTQ+ community.

Desmond is a writer, journalist, editor, essayist, and consultant who uses his voice to talk about LGBTQ+ issues in Nigeria and Africa. His latest writing which talks about conversion therapy in Nigeria, is one that would show you the horrors LGBTQ+ people in Nigeria are made to face.

Kasha is the executive director at Kuchu Times Media Group. She is a queer feminist who uses her voice to fight for the rights of LGBTQ+ person in Uganda and Africa as a whole. She also runs the Bombastic Magazine, TV, and Radio.

Mike is a journalist, and the director of NoStringsNG, a site for LGBTQ+ news and entertainment. Mike is also a web developer/designer. His work cuts across LGBTQ+ issues in Nigeria as he amplifies the voices of LGBTQ+ people.

Amara is a YouTuber who vlogs about her life and shares her story as a lesbian living in Nigeria. She also takes to Instagram and Twitter to talk about issues and amplify LGBTQ+ voices.

Walter is a writer and the director of Nigeria’s number 1 LGBTQ+ site, KitoDiaries. The work happening on the site is amazing. Through KitoDiaries, we get to read about the things happening in the LGBTQ+ community in Nigeria. The things in which the Nigerian media won’t publish. The amplification of LGBTQ+ voices and the creation of a safe space through the site, is one of the editorial desks highlight of the year.

Vic is a YouTuber and one of the creators of #EndHomophobiaInNigeria which trended earlier this year on Twitter. On YouTube, Vic talks about everything gay, and he adds his voice to the voice of many others in order to amplify issues the LGBTQ+ community faces in Nigeria. He also has a social media presence on Twitter, @vicw0nder, where he also amplifies LGBTQ+ issues in Nigeria and Africa at large.

And that’s a wrap! We hope you get to follow more of their works in 2021 and feel free to let us know of someone you think deserves to be on the list via email.

Happy Holidays, from the editorial desk and everyone at Living Free UK.

This website uses cookies to improve your experience while you navigate through the website. Out of these cookies, the cookies that are categorized as necessary are stored on your browser as they are essential for the working of basic functionalities of the website. We also use third-party cookies that help us analyze and understand how you use this website. These cookies will be stored in your browser only with your consent. You also have the option to opt-out of these cookies. But opting out of some of these cookies may have an effect on your browsing experience.
Necessary Always Enabled
Necessary cookies are absolutely essential for the website to function properly. This category only includes cookies that ensures basic functionalities and security features of the website. These cookies do not store any personal information.
Non-necessary
Any cookies that may not be particularly necessary for the website to function and is used specifically to collect user personal data via analytics, ads, other embedded contents are termed as non-necessary cookies. It is mandatory to procure user consent prior to running these cookies on your website.
SAVE & ACCEPT
PRESS ESC TO CLOSE
ankara escort
Hacklink istanbul escort Kamagra Levitra Novagra Geciktirici Kastamonu escort